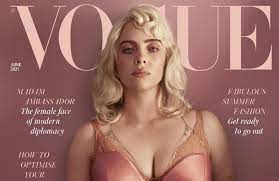 Billie Eilish has broken the internet again with her latest controversial magazine cover. Billie has always been known to wear baggy clothes and challenge modern fashion standards. Her reasonings behind this bold choice of hers is that she would like to keep a part of herself a mystery.

Though Eilish has intentionally worn oversized clothing for the majority of her career, recently she appeared on the cover of British Vogue wearing clothes that are “offensive” to some. Her cover look is the embodiment of the 1940’s bombshell fashion, and has gained a lot of attention from the bold clothing choices. Many people view her outfit choice as a betrayal to her promise to avoid judgement and sexualization by wearing baggy clothes.

The quote under the revealing photo says, “It’s about what makes you feel good.” Billie is obviously trying to send out a message that it is important to feel comfortable in your own skin.

Similar to her choice to hide her body, Billie explains that she also has the right to reveal her body in any way, shape, or form that she feels comfortable with.

Eilish has said in a recent interview that this is her most personal project to date. Recently though, life has been looking up for Billie. She’s preparing to drop her sophomore album, and has just been announced as co-host of the 2021 Met Gala.

It is incredibly important for Billie to feel comfortable in her own skin, and it is important for her to relay that message to her teenage audience. In the end, the only thing that Billie owes her fanbase is her music.